Killi-Data presents all known top quality information on extant oviparous and viviparous Killies or Cyprinodontiformes, including a data base, with full ichthyological, ecological, behavioral, and historical coverage, and, with aquarium maintenance and breeding information, and, with all details of systematics, morpho-osteology, genetics, patterns for each today valid, synonymous and unavailable taxon.

Killi-Data is a scientific knowledge base, automatically built on LATEST EVIDENCE, with extremely rare deviating CASES (if contemporary, listed and explained), fully in line with ICZN principles of stability and code.

Killi-Data access to knowledge base and all included services is completely free after simple registration with 9 ethical commitments at… FREE REGISTRATION.

Yes, it came as a surprise, because several teams were rumoured to be working on that complete molecular tree (several partial trees limited to a few species had been published in recent years) ; hence, nobody knew which team was going to be the first (if important) and above what were going to be the results ; obviously as a consequence, it appeared noteworthy to write immediately a newsletter so that these results are available to as many people as possible and as quickly as possible… keeping in mind that the other teams are going to publish (hopefully) shortly (and these new results will be transcribed herein as addenda, and in comparison to the first golden standard.
The new study has been published by a German-Swiss-Italian team led by Alexander Dorn who is developing a Ph.D. thesis from it, colleagues from Fritz Lipmann Institute for Age Research-Leibniz Institute, in Jena (with Alessandro Cellerino as the senior scientist acting as warrant or mentor) and this is to be read at (provisional PDF) BMC with all details, freely ; Dorn, Musilova, Platzer, Reichwald & Cellerino study the genes of 63 specimens from 46 valid species and 4 putative distinct yet un-named species, including 3 outgroups from West Africa, using a series of genetic sequences (including mitochondrial DNA) that are well known to be important as markers of evolution.

What are the results ?

Obviously there are results that are no surprise and results that change the whole understanding of the phylogeny (systematics and evolution) of the genus :

As a result, here is the molecular tree excerpted from that publication (this is nicely and smartly drawn with a mini pic of each species concerned). 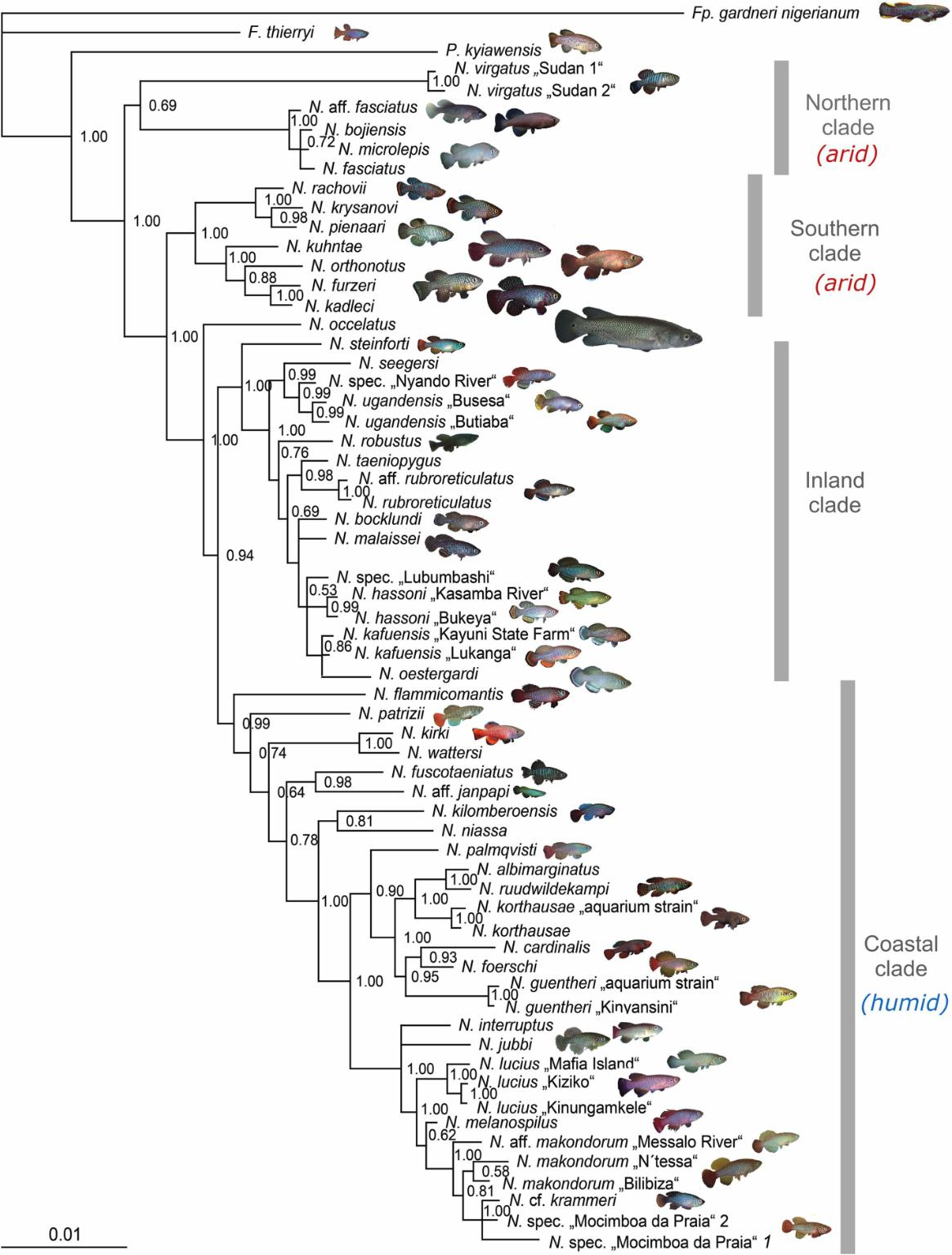 What are the impacts on the reshuffling of the subgenera and superspecies of Nothobranchius ?

In the following table (that can be sorted according to the title of each column), the list of all known species of the genus is given with, for each, the previous subgenus-superspecies assignment in Killi-Data, the new subgenus-superspecies assignment in Killi-Data (reasoned, i.e., not strictly following Dorn et al. and keeping some morphologically well characterized subgenera, with explaining comments), and finally the superspecies or species group for each, as directly derived from the new molecular publication ; please note that the 2 basal superspecies microlepis-bojiensis-fasciatus and virgatus remain orphans (no assignable existing subgenus and thus they are temporarily assigned in Killi-Data (it is artificial, obviously, but the computer programmes "need" an assignment) to the nominotypical subgenus Nothobranchius, as respectively "N.mic" and "N.vir", pending the creation of new subgenera, or… alternative results. Update note : the table must be updated by switching "N.mic" to Cynobranchius, "N.vir" to Plesiobranchius and (Aphyob.) to "Adin.jan".


What could be done next ?

second, patiently wait for the coming works of the competing teams, possibly with different results and with species or populations that have not been studied by the first team ;

third, address the long-branch attraction (a well known putative bias of molecular data) of the very isolated and possibly primitive species, virgatus, confirming it (implying a new subgenus naming) or ruling it out (with a move to a more "reasonable" placement… but what is reasonable ?) ;

fifth, deepen the issue of originating dates for the genus and its various clades (in the paper, the authors estimate the age of Nothobranchius genus to be 8.3 (6.0–10.7) Million years (MYA) and the separation of the 4 clades 4.8 (2.7-7.0) MYA, but this would have to be possibly correlated with major older tectonic events of the region, in the absence of fossil records… the authors themselves speak with caution on this) ;

and lastly and more importantly, expect for the sooner the better, a resulting new publication that tackles the systematic issues of the molecular tree(s), that redescribes (or synonymizes) existing subgenera with new morphological diagnoses (to leave readers with bruto molecular results is, according to the undersigned, too short, and even with present nomenclature rules, too little).

Obviously this first complete molecular analysis of the genus Nothobranchius raises some outside issues.
The first observation (now a catchphrase, "rengaine" in French) is that for all already published molecular trees of killifish groups, there is a gap (not a minor gap, but a major gap) with previous morphological findings and existing subgenera are often -not always- dynamited by molecular trees.
This would not be a reason, or even a pretext, to drop morphological (including osteological) studies or even to consider the molecular results as the non-negotiable truth (we know that depending on gene sequences or depending on full genome source, results can be very different, we know that those who spoke of non-negotiable truth with other techniques in the past became once isolated).
I would (personally) not favour the obvious solution using combined (morphological-osteological-molecular) data in a fused tree (e.g., with the TNT software), unless the 2 (or 3) individual trees are separately processed and shown to be similar (identical would be utopian)… this is fashionable among researchers at this time, but at risk and showing nothing if using a limited number of species.
Despite that big gap, it would be an error not to (at least try to) mimic the molecular tree with morpho-osteological characters and a resulting similar tree since it has been shown it is possible to have similar trees with many species for the genus Aphyosemion without destroying existing subgenera, even adding new well-diagnosed subgenera, or for the genera allied to Fundulus with only one genus unit dropped (Adinia).
Of course the Nothobranchius genus is much less diversified (i.e., much generalized in terms of male and female color patterns) than Aphyosemion and Fundulus and allied genera, and such a morphological new tree might not be easy to produce, but it is worth trying, with the possible reward of creating new understanding with new subgenera -or not- and new philogenies, then for better science.
Of course, having several subgenera for the generalized (with old components) genus Nothobranchius (and other killifish groups) is not absolutely necessary, but we have to be responsible and try to take into account previous findings of the past (even if a new diagnosis for Adiniops would be night and day compared to the original diagnosis by Myers, published in 1924, 90 years ago).
Of course, the alternative would be to drop all existing subgenera of Nothobranchius, because they are not in line with their present definitions within the new molecular data and frame (previous authors with morphological tools who described them more than 25 years ago did not -could not- anticipate the emergence of molecular techniques… that are, anyway, in their early years !).
Finally, an hypothetical option (not my cup of tea) for these existing subgenera (and other new subgenera, corresponding to each well individualize sub-branch of the tree) would be to upgrade all of them to full genus status (then no problem of heterogeneity)… hypothetical ? by the way, is it so hypothetical ? (guess if in the not so long past…).

Update note (May 2018) : Costa [ref. Costa, W.J.E.M. 2018. Comparative Morphology, Phylogeny and Classification of African seasonal killifishes of the tribe Nothobranchiini (Cyprinodontiformes: Aplocheilidae). Zoological Journal of the Linnean Society (Zool. J. Linn. Soc.), 21 pp., 7 figs.] revises genus Nothobranchius with today 6 subgenera Cynobranchius, Plesiobranchius (both new), Adiniops, Paranothobranchius, Zononothobranchius a comparative study of 42 species of the African tribe Nothobranchiini with included genera (Fundulosoma, Pronothobranchius and Nothobranchius) is proposed based on molecular data published by other authors and new morpho-osteological data (138 morpho-osteological characters) ; several new micro-osteological characters are disclosed to diagnose names ; the analysis confirms Fundulosoma position as most basal group to all other Nothobranchiini, and Pronothobranchius is confirmed as a valid genus, in-between positioned with genus Nothobranchius, as a cascade tree. Cynobranchius is described as new for a group of 3 deep-bodied, zooplankton-feeding species (microlepis et al.), diagnosed by 16 morphological synapomorphies, of which nine are probably related to their specialized feeding habits ; the clade containing Cynobranchius and the monotypic subgenus Plesiobranchius (containing virgatus, plus maybe the not studied occultus) is supported as the sister group to a clade containing all other subgenera of Nothobranchius ; Paranothobranchius is diagnosed by 17 apomorphic conditions, most of them related to specialized piscivorous habits (the study suggests that predator jaw morphology arose independently 3 times in Nothobranchius). Subgenus Aphyobranchius, formerly including specialized surface-dwelling species, is considered to be a synonym of Adiniops. However, the heteromorphic subgenus Adiniops is supported by a low bootstrap value (60) in combined tree. The other valid subgenus Zononothobranchius is not well supported {but a limited number of components is studied} and not fully diagnosed from Paranothobranchius. The nominotypical subgenus is diagnosed by 1 only (osteological) character.

In total a very important and sensitive newsletter !
Hopefully a boost to our community and a spur to speed up knowledge progress on our (beloved) fishes !

Take care and enjoy the scientific or aquaristic complexity of killifish !

Do not hesitate to ask questions for future Newsletters.

Thank you for your support over the years.

With my kindest regards (and thanks to 5 Nothobranchius experts, for their feedbacks and clarifications and comments on the above table for missing or unidentified species in the study).